2. Attend the September 19th Village Board Meeting at 7:30 PM to support the Anti-Corporate Welfare Ordinance.

3. Share the Online Petition with your friends, and urge them to send a message to the village board.

4. Attend the Heartland Institute’s “Don’t Feed the Bears?” Debate on 9/28 in Arlington Heights

4. Circulate Phase 1 petitions. COMPLETE! With over 650 signatures submitted, it is clear that Arlington Heights residents are concerned over the curse of corporate welfare!

5. If you would like to volunteer, stay up to date, or have any questions/concerns please email Julian at JAguilar@afphq.org and we would be happy to get you plugged in!

This is a historical time for Arlington Heights and Illinois. Don’t miss your chance to make history by stopping corporate welfare and protecting the taxpayers by supporting the Anti-Corporate Welfare Ordinance.

Opposition to using taxpayer money widened to 73%-21% when voters were made aware the NFL is the most profitable sports league in the world and it recently signed a $110 billion 11-year media deal.

The poll also found strong support for AFP-IL’s proposed Anti-Corporate Welfare Ordinance to prohibit the village of Arlington Heights from using taxpayer funds to help build a stadium and other corporate welfare programs by a 55%-30% margin.

AFP-IL Deputy State Director Brian Costin released the following statement upon the release of the poll:

“AFP-IL supports the Chicago Bears move to Arlington Heights, but only if they don’t expect a handout from the taxpayers. Arlington Heights residents strongly agree and through this poll are sending a message to the village to end the continued flirtation with corporate welfare programs.”

Recently, Arlington Heights Mayor Tom Hayes opened the door for taxpayer-financed subsidies saying, “We’re still in the process of evaluating what we might be able to do from a financial perspective. … We want to make this happen, so we’ll have to see what their needs and our abilities are, and try to balance the two.”

Below is the proposed ordinance.

WHEREAS, the Village of Arlington Heights is a home rule municipal corporation in accordance with Article VII, Section 6(a) of the Constitution of the State of Illinois of 1970; and

WHEREAS, the Village has the authority to adopt ordinances and to promulgate rules and regulations that pertain to its government and affairs; and

WHEREAS, corporate welfare undermines the principles of equal rights enshrined in the Declaration of Independence, the U.S. Constitution, the Illinois Constitution, and the Arlington Heights municipal code; and

WHEREAS, a 2017 poll conducted by the University of Chicago’s Initiative on Global Markets found that 83 percent of the economists surveyed agreed, “Providing state and local subsidies to build stadiums for professional sports teams is likely to cost the relevant taxpayers more than any local economic benefits that are generated.”; and

WHEREAS, University of Illinois at Chicago Professor David Merriman reviewed more than 30 studies of TIF over several decades, and concluded that, “in most cases, TIF has not accomplished the goal of promoting economic development.”; and

WHEREAS, an August 2021 poll by Americans for Prosperity Illinois revealed 77 percent of Illinoisans oppose corporate welfare for political insiders, and support providing a level playing field for all businesses;

NOW, THEREFORE, BE IT ORDAINED BY THE PRESIDENT AND BOARD OF TRUSTEES OF THE VILLAGE OF ARLINGTON HEIGHTS

SECTION 1. RECITALS. The facts and statements contained in the preamble to this Ordinance are found to be true and correct and are hereby adopted as part of this Ordinance.

SECTION 2. BAN OF CORPORATE WELFARE PROGRAMS. The Village of Arlington Heights is prohibited from offering or extending any financial incentive to any business or corporation to operate in the village.

SECTION 3. DEFINITIONS. For use in this ordinance, “incentive” means any economic, financial benefit, or other incentives, including, but not limited to, those authorized under the Property Tax Code, the Counties Code, the Illinois Municipal Code (including, but not limited to, the Tax Increment Allocation Redevelopment Act), or any other provision of law authorizing abatements, credits, loans or tax or fee reductions.

SECTION 4. EFFECTIVE DATE. This Ordinance will be in full force and effect from and after its passage, approval, and publication in the manner provided by law. 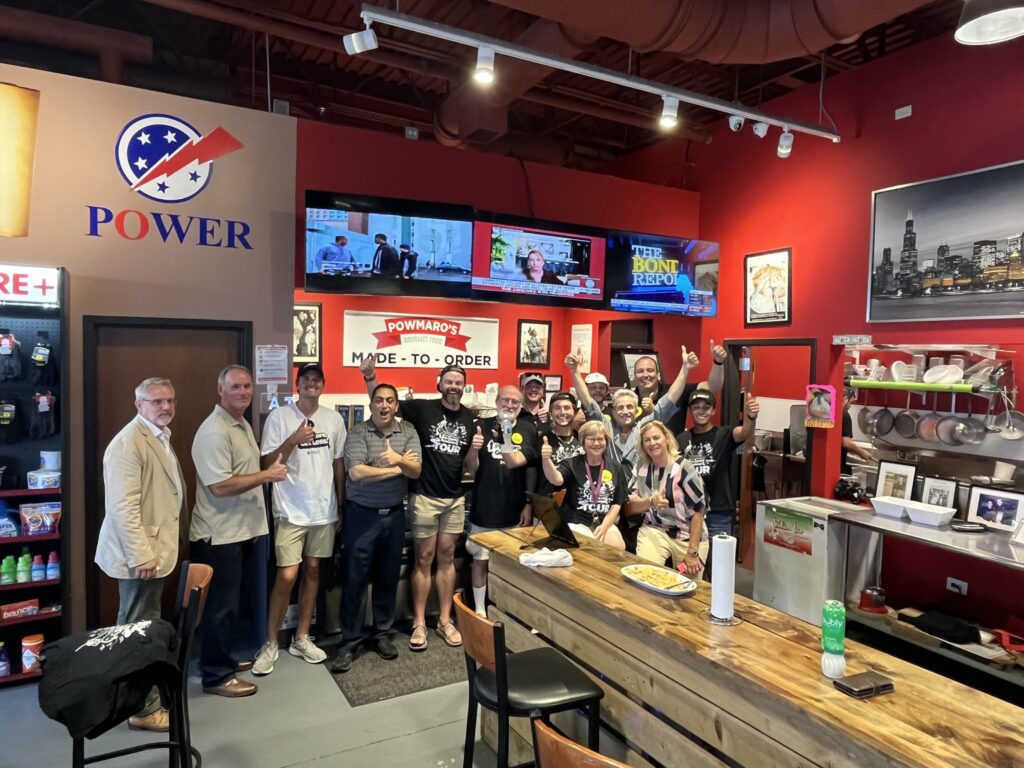 Downers Grove, Illinois – July 12, 2022: AFP-Illinois staff with gas station owner Sam Odeh and his team. Together, they provided nearly 160 cars with more than 1,600 gallons of discounted gas to counteract the high cost of gas in 2022.

Rand here with Americans for Prosperity. What a day in Downers Grove!

Even though Downers Grove is in DuPage County, we had many residents from Cook County who let us know their prices are even higher due to Cook County’s gas tax. That made the relief from the high cost of gas this year that much more valuable. 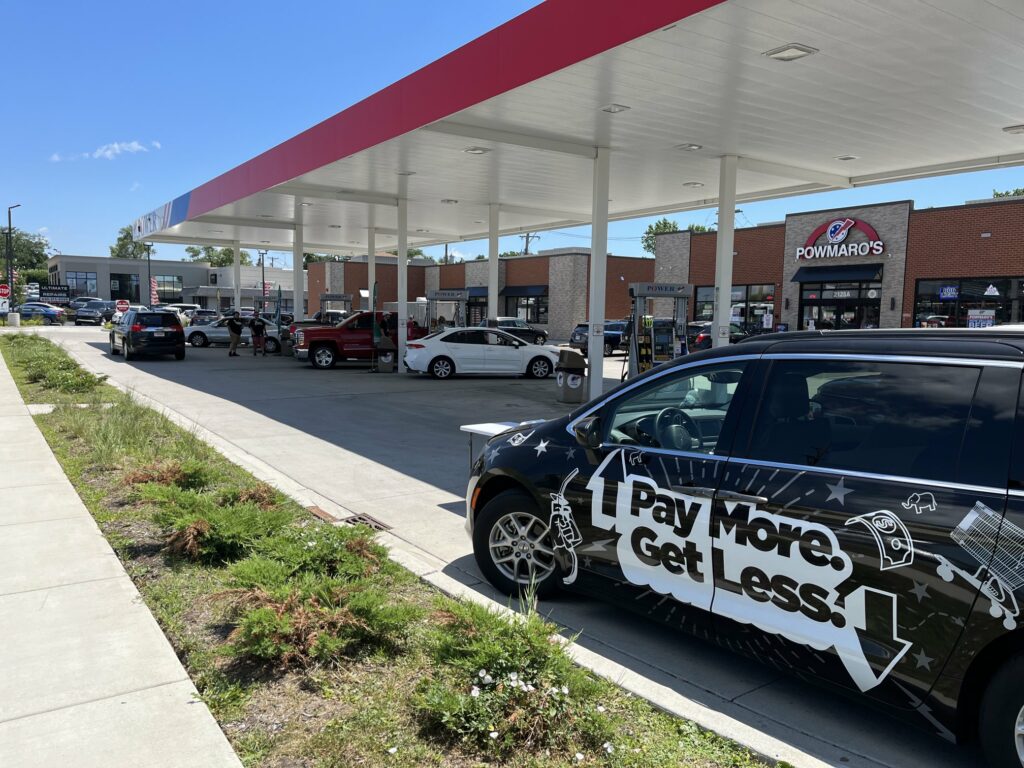 Downers Grove, Illinois – July 12, 2022: A quick look at some of the cars who received relief from the rising cost of gas this year.

We were joined by State Representative Amy Grant, who is fighting hard in Springfield to lower the cost of living for Illinois residents. Together, we were able to provide discounted gas to over 160 individuals.

One person said the extra savings in gas was so impactful that he is now scheduling a trip to the beach with his kids, which was not possible this month due to having to cut costs everywhere he could.

We were appreciative of the gas station owner’s hospitality, too. Sam Odeh and his team cooked a great meal and fed the entire AFP staff, volunteers, and even many residents who parked their cars to learn more about the True Cost Campaign as we listened to stories about how difficult prices have been to them.

Fox 32 News’ coverage of the event helped drive people (no pun intended) down to the station for their discounted gas!

The national average price of unleaded 87 octane gas was $2.38 when Biden took office

Kankakee, IL – Americans For Prosperity – Illinois (AFP-IL) rolled back gas prices in Kankakee today to welcome President Biden to Illinois. Lines to fill up with $2.38 per gallon gas, the average price the day President Biden took office, reached 4 blocks long. As of today, the average price for a gallon of gas in Illinois is $4.778 highlighting the challenges Illinois families are facing due to inflation caused by mountains of regulations and years of reckless spending from both parties.

“With the President in Illinois, we thought it fitting to welcome him to Kankakee with a reminder of the challenges Washington’s spending policies are creating for families across the country,” said AFP-IL State Director Jason Heffley. “Out-of-control government spending and burdensome regulations are primarily fueling the higher costs we’re all experiencing. It’s time we remove antiquated barriers to innovation, end wasteful spending, and unleash an economy where everyone is empowered to achieve the American Dream.”

Springfield, IL – Americans For Prosperity – Illinois (AFP-IL) responded today to Governor Pritzker’s budget address in which he made promises for temporary tax relief after three years of enacting dozens of tax and fee hikes and proposing even larger tax increases. The Governor touted the state’s fiscal situation including the state credit rating increase which was only possible due to a one-time federal bailout. Illinois still has the worst bond rating, highest total tax burden, and largest unfunded pension liability of any state in the country under Governor Pritzker’s leadership.

“Today, Governor Pritzker offered a typical election-year budget address full of short-term proposals and gimmicks that will do nothing to improve the long-term fiscal health of Illinois’ struggling families. In Governor Pritzker’s first three years, he enacted 24 PERMANENT tax & fee hikes totaling $5.2 billion per year. Now, in an election year, he’s proposing $1B in TEMPORARY election-year tax cuts including some relief on the gas tax which he pushed to double in his first year. Illinois is 50th out of 50 states in credit rating, we are consistently one of the highest taxed states in the nation, and people are leaving more now than ever before for states with more opportunity. Our elected officials need to stop playing politics and get to work on permanently reducing the tax burden, improving transparency, and ending the culture of corruption and corporate welfare.”

Rolling Meadows, IL – Americans For Prosperity – Illinois (AFP-IL) launched a new digital campaign today highlighting the audacity of the misinformation campaign being touted by elected officials on the state of Illinois’s finances.

AFP-IL’s campaign is focused on telling Illinois voters the truth about the state’s finances. Learn more at prairiestatepromise.com.

Over the last year, some state politicians have been busy issuing press releases, conducting press conferences, and producing television commercials about how great Illinois’ finances are.

In reality, our state’s finances are still a mess and by many measures the worst in the nation. Illinois has the worst-in-the-nation bond rating and the lowest pension funding ratios despite the highest combined state and local taxes in the nation.

The inaccurate portrayal of our state’s finances by politicians delays the necessary and hard decisions we must make before it’s too late, especially on the issue of pension reform.

We cannot let out-of-touch politicians ignore our state’s serious financial problems with political spin not grounded in reality. AFP-Illinois’ is focused on telling Illinois voters the truth about the state’s finances, and proposing real solutions to our problems.

Contact your elected official now and let them know you do not think Illinois finances are in great shape and they need to get to work to lower taxes and reduce spending.

As part of the Prairie State Project, Americans for Prosperity – Illinois is fighting tax hikes in Kane County and our efforts were recently covered by the Daily Herald.

A petition against tax increases with more than 200 signatures represented residents who couldn’t attend the meeting.

Having heard those comments and received a flood of similar emails, the board voted to postpone the budget and levy votes until 3 p.m. Nov. 30, at the Kane County Government Center, 719 S. Batavia Ave., Geneva. Nov. 30 is the last day of the county’s current fiscal year.

Americans for Prosperity -Illinois’ Jason Heffley and Brian Costin joined Craig Dellimore on the “At Issue” on WBBM Newsradio to discuss the Prairie State Promise in a half an hour conversation.